How to effectively use your nose to evaluate scent throw in finished candles.

In pursuit of that obscenely strong, knock-your-socks off, put-yankee-to-shame scented candle, we are often faced with the chore of comparing scents from different sources, and the same scents in different waxes, or the same scents with the same waxes and with different additives, and the list of variables can go on and on with no mercy on the candle maker. You know you can trust your nose to assess what smells good and what smells bad, but when we are talking about scent throw, what we are really talking about is intensity. And, chances are, you may be reading this article because you believe that your nose can betray you at times. So, how do we compare scent throw or intensity? It is very easy, but before we go into it I want to convince you to trust your sense of smell and perhaps understand a little more about what it tells you.

All of your sensory systems (hearing, sight, smell, touch, taste) have some common features. Basically, they take a stimulus and turn it into an electrical signal that travels through some nerves to eventually reach your brain where it is processed. With all those signals from all of the different sensory inputs, your brain has a lot of work to do. Fortunately for your brain, there is something called sensory adaptation.

Sensory adaptation is where, after being exposed to a constant stimulus for a while, the sensory receptors reduce and eventually stop firing signals off to the brain. They haven’t completely stopped functioning, but they have raised the threshold of activation. So, if a more intense stimulus comes along, they will be triggered to fire off a signal to the brain. But, lower intensity stimuli will not trigger the receptors. So, sensory adaptation acts as a filter for our sensory input systems and attempts to zero-out the constants in our environment.

Let’s look at an example of sensory adaptation. At some point or another, we’ve all had a bright light

shined directly into our eyes. Then after the light is removed, we notice our eyes have trouble picking things out of dim areas. What’s happened is the threshold level for your photo-receptor cells has been raised and they have become less sensitive to light stimulation. Next time you can’t find your vehicle registration, explain to the officer that your photo-receptor cells have adapted to his awesome flashlight and that your eyes can no longer detect what’s actually in the glove box, but that you are certain the registration is lurking in there somewhere. He’ll like that. You’ll be able to fish it out just as soon as your eyes adapt to the darkness again.

Your nose does the same thing. After being exposed to an odor for a while, the olfactory receptors (the ones in your nose) associated with that odor will increase the threshold of activation and cease sending the signal to the brain. So, your brain eventually stops getting the signal that it interprets as “frosted carrot cake.” That is unless you present those olfactory receptors with a more intense stimulus. After learning more than you probably cared to about sensory systems, this finally brings us back to candles and comparing scent throw. 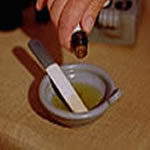 Let’s say we have two candles, A and B. They are both scented with Frosted Carrot Cake fragrance oil and they both smell accurate like the real deal, and they both seem to have really good throw and effectively smell up the entire east wing of our mansion (hey, it is hypothetical). Let’s also say that they were prepared differently in some way; maybe you used different additives, maybe you used fragrance oils from different sources, etc. But, what you really want to know is which one throws the best. That is, which one is more intense? Now that we know a little something about sensory adaptation, this will be a piece of cake (no pun intended).

To compare cold throw, take large whiffs directly from the surface of each candle. Inhale candle A deeply into your nostrils a couple times. Then do the same with candle B. Then go back to candle A. Go back and forth between the two candles a couple times. Eventually, due to sensory adaptation you’ll only be able to smell the more intense candle. The weaker one will fall below the threshold required to trigger those receptors.

Comparing hot throw is done in a very similar fashion, except we have to exercise some caution to avoid burning the hairs in our nose. Light both of your candles at the same time and let them burn for a few hours so that you have a decent melt pool in both. Then, extinguish the flame by dipping it into the melt pool (no smoke). Yep, extinguish the flame. Hot throw is emitted by the melt pool, not the flame. Besides, we have just eliminated the hazard of burning our nose hairs. Now, from a constant distance above each candle, take alternating whiffs from each one. The weaker one will fall below the threshold for a sensory response, and you will soon be able to detect only the more intense candle.

See how easy that was? So, now that you know how to make these comparisons, you can experiment with variables, such as additives, or wax, or cure time, and see what influence they might have on the scent throw of your finished candles.

FYI: It can be difficult to smell your own candles for several days after you have made them. This is also due to sensory adaptation and is a result of being exposed to intensity of the scent while you were making the candles. 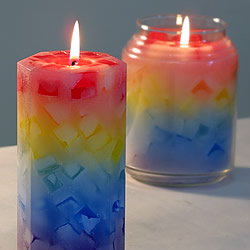 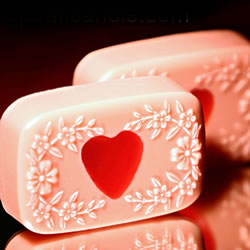 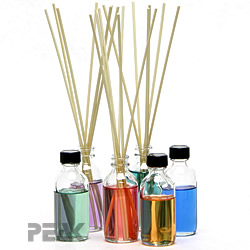